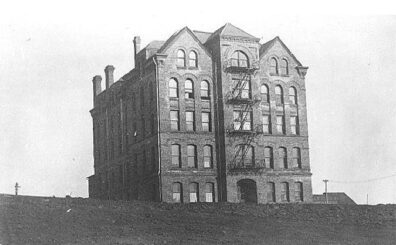 A view of the West facade of the original Ferry Hall, WSU Building #8. The campus is devoid of any landscaping; a fire hydrant (to the left), power lines and the roof of a shack are visible to the right. The shack, torn down ca. 1910, was used variously as a gym, veterinary barn, and steam plant. Built in 1892, Ferry Hall was the first large building to be constructed on campus. Designed by H. Preusse to be a dormitory, it housed men and women on separate floors. In 1897, there was a kitchen fire, which got out of control and the building burned down. 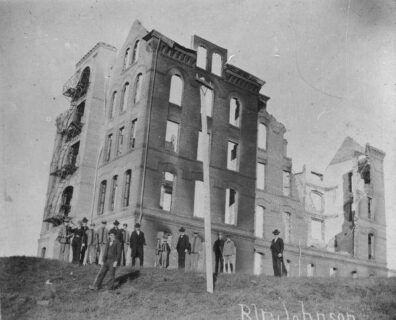 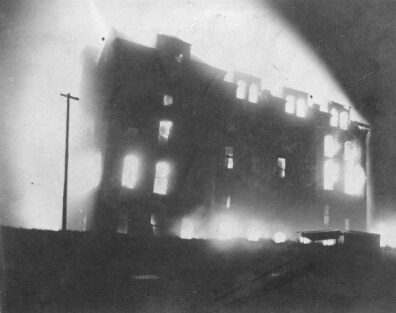 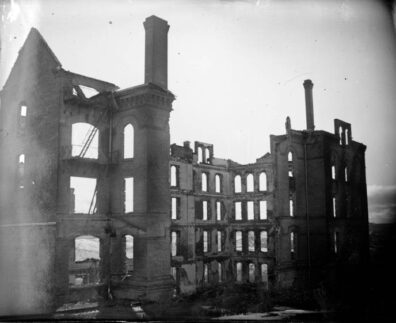 A nighttime view of the fire that destroyed original Ferry Hall, WSU Building #8. On November 23, 1897 a fire starting in the kitchen, located on the ground floor to the right, burned out of control. 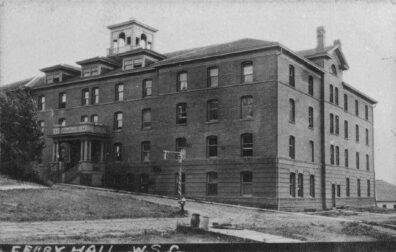 After the fire, another building was constructed in the same place two years later designed by G. W. Bullard. The new building with its Georgian facade would keep the name (sometimes called New Ferry Hall) and also serve as a dorm. The building remained until the mid 70’s, when it was taken down. A last artifact of Ferry Hall still exists in the form of the Gazebo next to the Alumni Centre, which was the old bell tower.